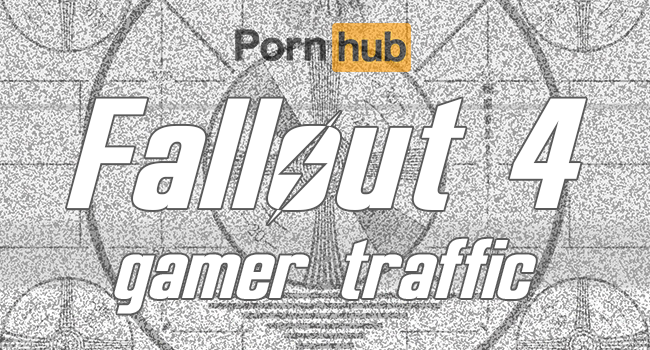 Thanks to the nifty (and entirely anonymized) “affinity” data that Google Analytics provides, we can see that many of our 60 million daily visitors are interested in gaming, based on their Google search and web browsing habits. Thankfully, our team of statisticians put down their controllers just long enough to look at how Fallout affected Pornhub’s traffic in the United States.

Compared to an average day, we saw a slight 5% increase in traffic among gamers in the early morning hours from 3-4 am. At this point we assume everyone’s download completed and the gaming commenced. Starting at 5am traffic began to drop, down as much as 10% from 7am till noon. In the afternoon traffic returned to normal, but after 6pm it dropped again when we assume that 9-5 workers arrived home and fired up their games. After midnight it seems like everyone finally took a break, and traffic jumped as high at 15% above daily norms.

Google’s affinity data can also make assumptions about the particular type of games that someone is interested in. Based on this, we looked at the overall daily change on November 10th and found the largest decrease in traffic came from Sports Games Fans (-13.7%), followed by Action Gamers (-7.7%) then Adventure and Strategy Gamers (-7.2%). Interestingly, the smallest daily decrease came from Shooter Game Fans (-1.2%).

Focusing on a few specific genres, we can see some interesting changes in the hourly graphs. Although shooter fans had the lowest overall change, they did have the highest increase in traffic before (+12%) and after (+25%) the Fallout 4 release. Action Fans and Adventure and Strategy fans followed each other closely throughout the entire day.