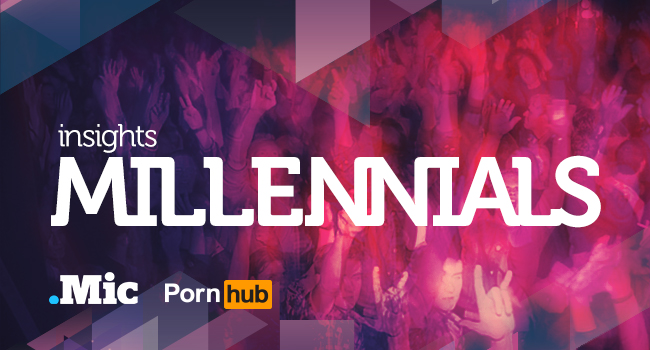 The Millennial generation, members of which are also sometimes referred to as Echo Boomers, consists of the demographic cohort born roughly between the years 1982 and 2000. Through a special collaboration with our friends over at Mic.com, we’re taking a look at the particular way that Pornhub’s 18-34 users interact with the largest adult site in the world. Touted by some as the most tech savvy generation to date, millennials are generally known for being glued to their phones and sharing all aspects of their lives on social media. Thanks in part to the open and rapid access to information afforded to this group by the web in their formative years, the sense of media awareness and general world views of these 18-34 year-olds truly sets them apart from previous generations in the way that they consume online.

WHAT DO MILLENNIALS WANT?

We’ll start out with a quick overview of how exactly our millennials, who account for 60% of our site users overall, typically interact with the site, compared to our older generations of viewers. According to our anonymized demographics data provided by our analytics software, millennials tend to visit the site the most between the hours of 11 pm and midnight, which is an hour later than when our 35+ users prefer to log on, though both groups visit the site the most on Mondays and the least on Saturdays. This is a trend which we noticed internationally in our Year in Review, which likely accounts for the fact that folks watch more porn to ease themselves into a new work week and rely less on the need for release as the weekend approaches.

When we did an in depth study of how our various age demographic groups interact with Pornhub, we noticed that with age comes enviable lasting power. Simply put, our older viewers tend to spend longer on site, on average, which is again affirmed in the chart above which indicates that millenials generally get the job done a whole minute faster than their 35+ counterparts. Millennials also win points in the girl power department, in that 24% of our 18-34 year old users are women, as opposed to just 21% among those aged 35+. Keeping true to the technical abilities that they are known for, millennials also use mobile devices more, but we’ll expand on this further on later in the post. Let’s move on to a look at which search terms are most popular among our Echo Boomers.

College-themed terms like ‘teacher,’ ‘party’ and ‘college’ are also searched for proportionally more by millennials, whereas terms relating to marriage and older age like ‘cougar,’ ‘wife swap,’ ‘granny’ and ‘amateur wife’ are all searched for between 25% and 59% less. Let’s now take a look at the categories most viewed by millennials.

WHERE ARE OUR MILLENNIALS?

Here we have this same breakdown for the countries with the highest and lowest proportions of millennials visiting Pornhub. At first glance, it’s apparent that most of the countries with higher proportions of younger viewers are located in Asia, whereas those with considerably lower proportions of users in this same age group are located in Europe. For instance, India has an incredibly high number of Echo Boomers at 80% but we know from our more in depth coverage on age demographics that over 50% of their viewers are aged 18-24. Over 50% of India’s overall population is aged under 25 and the country’s median age is 27, to put things into perspective. Countries like Indonesia, Egypt, Vietnam and South Korea also fall in the 70% range with regards to their proportions of millennial-aged viewers.

For this next portion of the article, we’re going to focus on the relationship between our millennial-aged users and technology. As previously mentioned, one of the key tenets of the generation is that its members are generally quite technologically inclined, so we’re covering everything from operating system, to gaming consoles and more. Let’s start with a general look at device usage among the group:

Chrome is the clear winner among Echo Boomers on desktop, far surpassing other browsers like Firefox and Safari. The most recent W3 counter stats reflect nearly the same levels of popularity in terms of overall browser use worldwide, save for the fact that Firefox is more popular with millennials in its 2nd place position here, versus 3rd on W3. Though Opera takes the bottom position in terms of most used desktop browser, the Norwegian browser is 65% more used by millennials than older age groups. In this same sense, Internet Explorer is 63% less used by milliennials than users aged 35 and up. On to mobile browsers.

Android wins out over the iPhone’s iOS though again, millennials also happen to use the operating system 5% less compared to older generations. They do, on the other hand, use Windows Phone a whole 30% more than their 35+ aged counterparts. We’ll move on to a breakdown of Windows version use by millennials.

Again when we take a look at the W3 stats counter, Windows 7 is the most popular operating system in the world, and it is also by far the most used version of Windows by millennials, followed by Windows 8. The more dated Windows XP and Vista are 11% and 35% less used by Echo Boomers when compared to older generations, again speaking to the relative importance attributed to keeping up with new tech among the group. Last but not least we’re breaking down game consoles.

The handheld Playstation Vita is 213% more used by millennials, compared to older age groups whereas they use the now dated Playstation 3 almost 60% less.

That’s a wrap on our millennial coverage! As always, we welcome your feedback and questions in the comment section below. We’ll be back with more Insights very soon, so be sure to check back regularly.

Here’s some additional data about Pornhub’s millennial visitors from Switzerland!

Swiss millennials account for 54% of traffic in Switzerland and clock in at just over 9 minutes per visit, which is 36 seconds less time than older generations there require. The gender split in Switzerland is larger than the world in general. 27% of Swiss millennials are women, but only 23% over the age of 35. The difference between generational device usage is significant. 54% of millennial traffic comes from Smartphones, whereas Swiss visitors over 35 only use smartphones 24% of the time.

Millennials in Switzerland are quite the patriotic bunch with regards to their top searched terms. ‘Swiss’ takes 1st place, but is followed ‘schweiz’ in 5th, though there is a clear affinity for the guys and girls next door as ‘german,’ ‘deutsch’ and ‘german teen’ rank in at 2nd, 11th and 13th place respectively. ‘French’ comes in at 4th and though not quite neighbors, ‘czech‘ takes the last spot at 20th.